While Prince Valerian adjusts to marriage as well as his new title, conspiracy brews in the south among disgruntled lords who wish to separate from the north. The situation is made even more volatile by a charismatic rebel leader whose guerilla tactics are swift and brutal.

The clandestine efforts of a witch hired by one of the lords render Valerian’s gift of Sight ineffective, and Merry’s Healing gift is sorely tested.

It has become dangerous for a northerner living in the south, and if the gifted young royals fail to stop the growing rebellion, evil will reign in Levathia. 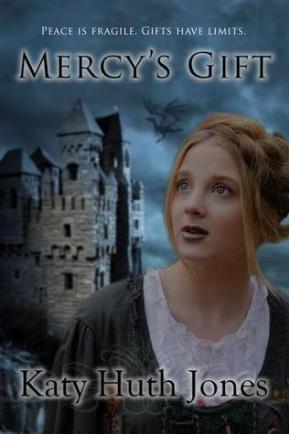 This is the second book in the He Who Finds Mercy series. AlliesOpinions reviewed the first book in this series not too long ago.

Mercy’s Gift was set to a very different pace compared to Mercy’s Prince. There was a lot of character building and world building throughout this book and the reader really gets to intimately know the characters. I enjoyed that. It helps to solidify them in my imagination and bring them ever closer to being “real”.

I also enjoyed how Valerian and Merry’s marriage is realistic. It wasn’t all “and they lived happily ever after, the end”. Because honestly, that’s not real. There is a definite adjustment period. Especially for two people who haven’t known each other long. They are really feeling each other out. It’s hard to go from only worrying about oneself to having to consider how your every action can affect someone else. Kudo’s to Jones for capturing that. It gave a real depth to Merry and Valerian’s relationship as well as their individual characters.

One of my favorite parts of this book was hearing so much from Kieran. He has been a favorite of mine from the first book. His character is so bright and complicated. He was so well explained that he felt real. He is such a likable guy. I was glad to see him form attachments to other people other than just Valerian. Even if those attachments later cause him pain. Seems like that’s a common theme for poor Kieran.

I also approve of the way Kieran and Merry’s situation was resolved. At the end of the first book my heart was really hurting for Kieran. I could see how much pain he was in. I like how they found a way to maintain their friendship and continue to support and be there for each other.

Once the action got rolling, it got ROLLING. In a big way. The build up was a little drawn out but overall it was well done. Though the build up did get kind of tedious, one has to remember that this is a book in a series and that usually allows the author a bit more wiggle room with long explanations and drawn out suspense. I got the sense that those involved in the plot were really biding their time and that helped carry the story.

I will say this….I hated the ending. Hated it. I am a tidy it up all nice and pretty kind of person. I like my happy endings. This did not have a happy ending for me. That is my only real complaint with the book.

The writing had much more finesse compared to the first book. The characters have much more depth and the world is explained in much more detail. All in all, it’s a pretty good book for a second book in a series. The characters are likable and easy to get attached to. The dragon’s are still awesome and of course Valerian still gets to ride one. People die but, in noble ways. Levathia has become more real with this book. I will be reading the next book. Hopefully something good will come along to help me get over the ending of this book.

I enjoyed the book but, I didn’t feel like it was as great as the first. So, I give it 4 stars.

This book may have some events that are triggering to some people. Please click the link ” Scifi and Scary Triggers Post” to check for yourself. WARNING: This post will have spoilers….