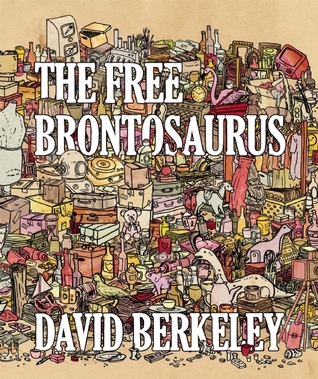 The Free Brontosaurus is a novella comprising ten interweaving stories, complete with an accompanying album of ten songs. All set in the same fictional city, at the same moment in time, minor characters in one story are major characters in another. It is a bit like Olive Kitteridge, if reimagined by Miranda July. These are gently written narratives of isolation, describing characters disconnected from home and community. The book is full of dark humor, sadness and glimmers of joy. Ultimately, the characters’ abilities to find beauty in the bizarre connect and redeem them, offering the characters (and us) hope.

The book is only half of this project, though, for it also comes with a soundtrack, one song per story, written loosely from the perspective of the main character from each tale. Both the book and the album can stand alone. However, when the two are appreciated together, an unusually moving and multi-layered world is born, likely to break and heal the heart.

The Free Brontosaurus is a collection of short stories about people who all live in the same area and their individual experiences. They intertwine beautifully.

I will be reviewing each story on its own and then give a collective rating and conclusion.

The Find follows Russel. Russel was a character I liked immediately. He reminded me of an old man who used to always come into the grocery store I worked at as a teen. That old man would come in almost every day with a new riddle for me to solve.

Russel finds the brontosaurus and I loved how much he treasured it. That old dinosaur became his companion.

This story and character have a deeper meaning than what’s on the surface. I felt like this was really a story about loneliness.

One of my favorite parts of this story was when Russel tells the brontosaurus that he was free and could leave anytime but that Russel really wanted him to stay.

It was a beautiful look into how selfless a person can be, even when they are deeply sad and feel very alone.

Freezer Drawer follows a single mother named Suzie. Suzie was a very relatable character. All mothers (especially single mothers) have that moment in their life when they find they have lost their identity. We become nothing but mothers. We put down our hobbies and live for our children.

At some point most mothers realize the folly of this. We start to emerge out of the cocoon of motherhood and reform multi faceted. Motherhood develops into a part of us as opposed to of all of us.

This was a beautiful story depicting that transformation. To me, this was also a story of hope. When Suzie is reminiscing over her old paints and brushes, I felt like her spirits were lifting. I felt like Suzie was becoming herself again.

Puzzling follows a recently tenured physicist named Owen Hobbes. This story was powerful. I felt it was a bit of a cautionary tale.

Hobbes wants to learn. He sees the world as small bits of matter. He wants to prove this but his research had hit a hard spot. Maybe it was the frustration that led him to take drastic measures. Who really knows?

I think this story is more about how Hobbes felt out of control. I think this is what led him to literally lose himself. His intellect.

The puzzles were a terrific device for this author to choose. I felt it symbolic as well as literal. Hobbes literally pieced his life back together. I felt like this was a message to the reader that no matter how far gone you think you have gotten, you can always “puzzle” it out.

Beautiful use of symbolism.

Found Art follows Shelia. Shelia is a middle aged woman who catches her husband cheating and promptly divorces him.

She is angry but holds it in. She doesn’t lash out at her cheating husband or really anyone. Until one day, the flood gates open.

All the anger she has at life comes to the surface full force. Every small thing feels like a big thing and Shelia has no patience for it. Her bitterness and anger fly everywhere.

I think that this story could have many meanings for different people.

What I took from it was that we have a right to be angry when someone wrongs us. We have to find some sort of closure. Some small piece of revenge. I love how she gets her revenge too.

The brontosaurus makes another appearance in this tale. The symbolism is strong here.

Driftwood follows Harvey. An older awkward man who has no one and little to nothing.

I found his character to be one of the most beautiful in the story. He has blue collar worker written all over him. He is rugged and gruff but yet has this softer side where he carves these beautiful creations from driftwood.

Harvey tell this beautiful story of how he came into the world. With this and his encounter with a woman painting in the park, I felt like he became so much more in my mind than an old drifter. He emerged in my imagination from awkward to graceful and endearing.  He started to flesh out into a man who in many ways had been left behind in the wave of a changing world.

You can see men like him in the faces of those old guys in diners nursing their coffees with careworn faces and rough hands.

Harvey’s character will stick with me for awhile.

A Dinner For Strangers

A Dinner For Strangers follows Eliza. She is a woman caught between two worlds. On the one hand she is young, but with the emerging grey hair she feels she is entering middle age sooner than her time.

Grey hair is symbolic to me. It transforms an otherwise carefree young woman into an adult who needs purpose.

I think that all of us as we age transform ourselves in many ways. Our clothing changes. Our opinions change. Our goals change. The person that we are is in many ways a revolving door until we take all those pieces and make them a whole.

I loved how Eliza found her purpose. It was beautifully touching.

Tea for Two follows Rose. Rose is an older woman who is starting a new chapter in her life.

I felt her desolation. I felt her sadness. I felt her uncertainty. Towards the end of our lives I think it is common to reminisce on our pasts and try to work out how things ended up the way they have. Often there are regrets.

Our spouses in many ways become a part of us. Even when they have passed I think it is soothing to still speak with them as if they aren’t. In many ways it helps those left behind to feel less abandoned and alone.

We all need some kind of purpose in our lives. I enjoyed how Rose found hers.

You never know what that tiny bit of kindness you extend to a stranger could  mean to them. It could mean nothing….or everything.

The Free Brontosaurus follows Martha and Carl. They are a middle aged married couple who at first seem to be on the same page and blissfully happy. Until they aren’t.

I felt that in many ways this story is about miscommunication and depression.

As we age we sometimes find that the things we thought we didn’t want back then are things we desperately need now. In a marriage, these drastic changes in our needs can be hard to reconcile with our spouse.

For some women the biological clock gets to ticking and our body screams baby. When it doesn’t pan out and a baby isn’t growing in that lonely uterus, a woman can fall deep into depression.

I think this is a subject that some men have a hard time completely grasping the gravity of. It’s a mix between feeling like an utter failure to the hollow loneliness that creeps inside.  That hole can devour a person.

I was very happy with how this issue is resolved. Communicating and sympathizing are key.

Building a Bridge follows George. George is an old man whose wife has recently left him for a woman. This of course comes as a big surprise to George. It leaves him feeling unbalanced and unsure of himself and the world around him.

The bridge in this story for me was symbolic. I think it represented change. Change for George. Like the ending of an era. The era of life as he had known it.

When George meets Rose and invites her to the bridge opening ceremony, my heart swelled. What a perfect solution for two wonderful lonely people.

Symbolism is strong in this story and is expertly wove in.

Free At Last picks back up with Russel. Russel’s life changes drastically when his long lost daughter appears out of the blue at his door.

In the first story of Russel it was clear that something had happened to cause him so much hurt. Having your wife leave you and take your only child with her would be devastating.

I loved how the two reconcile. This story is an intimate look at how two people can heal each others hurts. It literally brought tears to my eyes. When Russel looks at his daughter and tells her “But I had no idea where to look for you, Lucy. I had no idea where you went” I  balled my eyes out.

This is where we find out why the Brontosaurus was so important to Russel…and why it isn’t that important anymore.

The Free Brontosaurus  was an emotional roller coaster. David Berkeley does a fantastic job of weaving each character into each others stories. Berkeley’s beautiful use of symbolism was intimate and memorable. From the moment I picked the book up I didn’t want to ever set it down.

Each character draws you in and builds an emotion attachment inside your heart. Each person in this story has a profound impact on the reader. Berkeley has written a story that will burrow it’s way inside every readers heart and soul.

Russel was my favorite character. He will forever hold a piece of my heart. I will treasure this book.

The songs perfectly compliment the stories.

I give this book 5 stars!

This book is available for purchase through Amazon. Click the link below.

One thought on “Book Review “The Free Brontosaurus” by David Berkeley”