Malcolm Graves lives by two rules: finish the job, and get paid. After thirty years as a Collector, chasing bounties and extinguishing rebellions throughout the solar system, Malcolm does what he’s told, takes what he’s earned, and leaves the questions to someone else–especially when it comes to the affairs of offworlders.

But his latest mission doesn’t afford him that luxury. After a high-profile bombing on Earth, the men who sign Malcolm’s paychecks are clamoring for answers. Before he can object, the corporation teams him up with a strange new partner who’s more interested in statistics than instinct and ships them both off to Titan, the disputed moon where humans have been living for centuries. Their assignment is to hunt down a group of extremists: Titanborn dissidents who will go to any length to free their home from the tyranny of Earth.

Heading into hostile territory, Malcolm will have to use everything he’s learned to stay alive. But he soon realizes that the situation on the ground is much more complex than he anticipated . . . and much more personal. 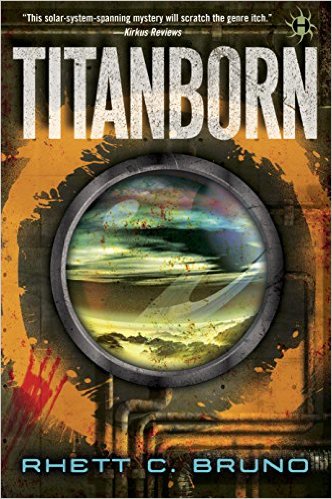 Rhett has been writing since before he can remember, scribbling down what he thought were epic stories when he was young to show to his friends and family. He currently works at an Architecture firm, but that hasn’t stopped him from recording the tales bouncing around inside of his head. Rhett is the author of “The Circuit Series” and “Titanborn.”

He’s happy to hear from his fans and can be reached at rcbruno44@outlook.com!