One horrifying day will change the life of sixteen-year-old Shane Tucker and every other kid in the world.

In a span of mere hours, the entire adult population is decimated, leaving their children behind to fend for themselves and deal with the horrific aftermath of the freak occurrence. As one of the newly made elders in his small town, Shane finds himself taking on the role of caretaker for a large group of juvenile survivors. One who just happens to be Kelly Douglas–an out-of-his-league classmate–who, on any other day, would have never given Shane a second glance.

Together, they begin their quest to find out why all of the adults were slaughtered. What they find is even more horrifying than anything they could have expected–the annihilation of the adults was only the beginning. Shane and his friends are not the unlucky survivors left to inherit this new, messed-up planet. No, they are its next victims. There is an unknown power out there, and it won’t stop until every person in the world is dead. 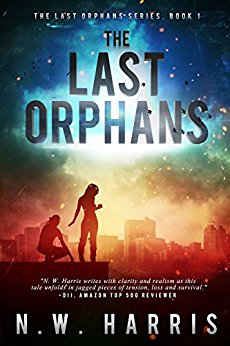 Prepare yourselves, this book moves fast. It’s non-stop action the entire read. There is never a good stopping point and every single time you have to close the book it will cause you literal pain!

Shane is a kid whose entire life goes to hell in a hand-basket far quicker than it has any right to. This book is a great insight into how quickly things really can fall the heck apart. The death scenes are brutal and horrific but I do have to give Harris kudos for his imagination. I don’t think I’ll ever look at a single bug again without thinking of this book.

Some of the realities of this story and the choices that the characters have to make was heart wrenching. No one thinks about tiny babies in these scenarios. Once that was brought up it stuck in my mind and still sneaks into my mind when I really REALLY don’t want it to. Because really, I would like to think that I would go house to house rounding up babies to take care of but……with the ever growing chaos and the continuing decline of older kids and safe places….it’s something to think about for sure.

Harris has created a world that sucks you in and doesn’t let go. I’m looking forward to continuing the series and getting more answers to exactly what is really going on.