In a world where gods pull the strings of mortals and people wield the power of the elements, the nation of Libera is attacked by its age-old enemy, the Kem, who lay waste to the land and its armies with their demonic powers of fire and steel.

Imharak, a blacksmith’s apprentice, is forced to leave his hometown when it is raided and burned to the ground. Together with his master, Gaius, he flees into the wilderness, heading for Gaius’ brother, who is caught near a city that has just been conquered by the Kem. What troubles Imharak is not so much the invasion, but the fact that he shares the same powers as the invaders, leading him to question where he came from.

He never knew his parents – he was raised as a Liberite and destined to be a common blacksmith. His powers had always made him an outcast, and now he starts to think he might have more in common with the conquerors than with the conquered.

Soon, Imharak will find his allegiances torn between both sides. As he and Gaius journey closer to the lion’s den, Imharak will discover who he really is and what he is capable of.

A bloody, harrowing adventure that takes its cues from ancient civilizations and mythologies, The Fire and The Forge is like no fantasy you’ve ever read.

While a lot of epic fantasy is set in a world resembling medieval Europe, The Fire and The Forge is influenced by ancient Mediterranean civilizations like Egypt, Israel, Carthage and Rome. It owes more to the world of the Old Testament and Mt. Olympus than the world of knights, wizards and castles. You’ll find no elves, dwarves or goblins here. No dark lords, dragon-slayers or prophecies. You’ll find no good or evil, but only a grey sense of morality as people are forced to make life-or-death decisions in a harsh and brutal world.

From the very first sentence, this intimate, character-driven tale will dig its hooks into you and haul you along to the bitter end.​

“After joining Jacks email list, I purchased the paper back version of the Fire and the Forge, running at just over 400 pages, I found this novel impossible to put down,
The BEST fiction book I’ve read all year, and I want to tell you why.
Page by page, Jack Geurts masterfully plays with your mind, pulling the strings of your imagination and drawing you into the world he has created, so you feel as if you are on the journey yourself with the lead characters.
The twists and turns throughout had me physically yelling out at times for I couldn’t contain my excitement.
For those who love fantasy fiction, do yourself a favour and read this book. I can imagine the sequels will be just as gripping as the original.
The original lays the perfect foundation for the sequels to take place. It answers the right amount of questions about the world laid out for you, while maintaining the mystery that will keep me coming back for more.” – Amazon Reviewer Christine 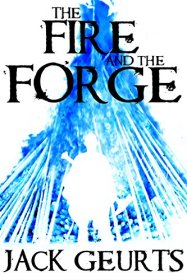